Important Information to Know What to do in NBA 2K21 MyPlayer Builder for PS5, XSX 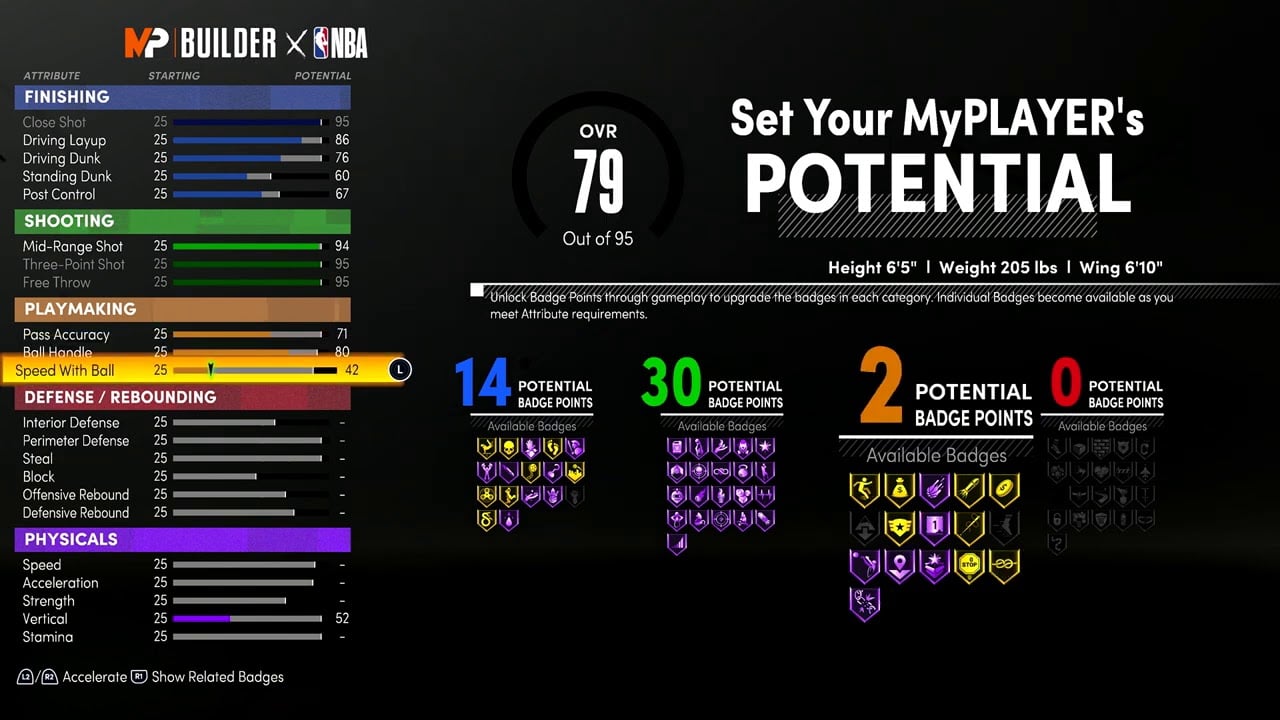 A few days ago, 2K Sports revealed MyPlayer Builder details for next-gen PlayStation 5 and Xbox Series X systems, when they release in two weeks. In a brief video reveal, it was confirmed that pie charts were officially gone, as well as the new attribute system allowing freedom.

For the first time ever, players will be able to make a player that has a 90 three-point and a 90 driving dunk. While we expect limitations for defense and playmaking; the new build-archetype many are excited about is sharpshooting-slasher. However, the biggest factor of MyCareer builder, is that you’ll have to use each attribute badge to unlock purple badges within an individual category.

So, this ties into small forwards and guards being able to have access to purple defense badges against centers. In the past, we’ve been able to pick any badge we want, within the realm of an attribute category. Now, you’ll have limited access to what you can do on defense. If you decide to have higher perimeter defense and high steals, then it will unlock purple clamps and pick pocket.

Big men, who chose interior defense, rebounding and blocks; will not have access to clamps anymore if their perimeter defense is low. So, every position, will be assigned to their specific task, with no more builds being able to do what opponents do. Outside of shooting, the biggest game changer is playmaking. Beforehand, we hand, we’ve had pass accuracy, ball handle and post moves. However, on next-gen, post moves have been removed from playmaking and replaced by speed with ball.

This will likely be a game changer for those slashers, who won’t have access to pro dribbles and just need speed with ball for dunks or layups. However, for dribble gods, like us, who specifically made orange charts in the past, we’ll be unlocking every play badge on purple for the park. New to playmaking is bullet passer (LeBron-like passing), relay passer (essentially dimer) and special delivery (take over boost for both players after a flashy pass highlight).

Those have replaced past badges like pass fake maestro, flash passer and lob city passer. While everyone will be looking past physicals, that’s arguably the sleeper section of the entire MyPlayer builder. Speed and acceleration have always been important on the wing. However, strength will finally play a big factor this year for slashers and big men, as well as stamina.

If you’re on the wing, we recommend you putting stamina, speed, and acceleration at least a 90, so those will boost up to 95 after your weekly workouts. After you hit 95 rating, you’ll also get a 1-point attribute increase after every rating increase; so, take that into consideration as well. As far as shooting, too much has been added and it’s pretty self-explanatory for you to figure out when making the builder.

In shooting attributes, post-fade has been removed, leaving only three options. Out of every new shooting badge added, the most intriguing one will be sniper boost. The badge is explained to boost the ability to hit shots when using pro stick aiming. This is likely what 2K Sports wanted users to get accustomed to, if you were shooting with the stick and getting shots centered before their patch ended those plans.

So, even if you’re not a sharp, we’re under the assumption that you should be able to unlock sniper boost badge without having a 90-three. This would be a game changer for people who are lights out from three like us, that only need a 80-three ball.

We know playmaking-shot creator was the safest build to make on current-gen. However, the new freedom, with having clamps, deep threes and contact dunks, ALL ON PURPLE; will have players re-thinking their entire gameplan. If you can’t shoot or don’t know how to use the stick for sniper boost, it would be advised to spend a few hours in the gym learning a shot.

Builds will now be triple threats, across any position.

Badges: A lot of thought and re-design went into badges for next-gen. Many favorites return, but most have undergone some significant functionality changes. There are also some new ones, some revived ones, and some removed ones. The badge point system and equipping process is similar to what you’ve grown accustomed to: perform well in the various categories (Finishing, Shooting, Playmaking, Defense/Rebounding) in any mode to earn badge points, and then apply those points to whatever badges you want within those related categories. But my advice when you get next-gen is to experiment with different badges that you may have overlooked in the past because you might find some new favorites that compliment your playstyle that you may not expect. Here are some of the new/returning badges and what they do:

Takeover: In case you’re new to 2K, Takeover is the ability to get hot and take over games. It’s been a popular feature for the past couple years and we wanted to take it to the next level for next gen.

Instead of limiting players to eight general archetype-based takeovers, we’ve broken those eight into 24 more specific takeover abilities. In a way, you can think of them as unique badges that you can fire off when you get hot.

We’ve also changed Takeover to be a multi-tier system! Once you set up your ratings caps and vitals, you’ll be presented with a subset of the list above based on the type of build you made. Then you choose one ability for your primary and another for your secondary, or if you want, you can put the same ability in both slots if you want to “double up” on it. When you’re in-game, your takeover meter will fill up your primary takeover slot first. Once filled, you can choose to activate it right away or wait to try and fill up your secondary slot. You must be careful because you take the risk of losing all your progress if you turn the ball over or miss a bad shot. But if you can fill in your secondary slot, you can activate both the primary and secondary takeovers together and keep them active for a longer period of time. Finally, if you want to devastate your opponent even further, you can wait even longer and try to fill up the Team Takeover meter. If you can fill all three, activating will enable your entire teams’ takeovers and it’s pretty much over for the competition. And just like in current-gen, activating Team Takeover also allows you to have user-control over your teammates in MyCAREER games. We know our MyCAREER fans love that ability!

Last thing I wanted to mention about Takeover. We wanted to honor our late friend, Kobe Bryant, who we tragically lost way too early this year. When you’ve earned all your badge points, you will receive the Mamba Mentality badge which allows you to change your takeovers whenever you want. So just like Kobe, you can vary up how you choose to take over from one game to the next!

How Jayson Tatum, Jamal Murray, and Paul George reacted to their updated #2KRatings 👀