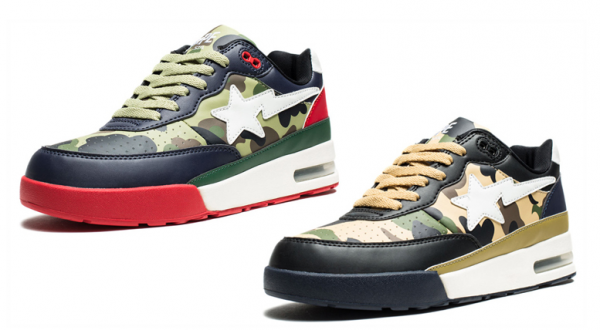 Japanese streetwear brand, A Bathing Ape takes us back to the past with their latest sneaker release, bringing diehard Bapester fans a new dose of their classic sought-after Nike Air Max-inspired Road Sta silhouette. For the Holidays, the Road Sta’s make their return for the “First Camo” pack, where BAPE decided to trick-out two-pair of Road Sta’s with both renditions of their signature Ape-head camo print. One pair takes on Bape’s Army green-based camo-print with red accents throughout the shoe, and the other pair takes on Bape’s beige-based camo-print with black hints around the model.

The BAPE Road Sta “First Camo” pack is available right now exclusively at all Undefeated retailers and also over at their online shop  for $261 each. Get a closer look at the pack  above.