With The 20/20 Experience finally over, Justin Timberlake took the year away from the public to focus on his new family and finally sleep. His other music half, Timbaland, was guest on TMZ Live a recently and revealed the two are planning to get their twang on.

While the two teased the transition on Timberlake’s last album with “Drink You Away,” it’s always something the pair had envisioned doing at one point in their career. Watch Timbo discuss the future he and Justin have planned for their imminent next collaborative affair. 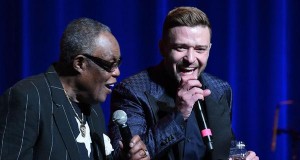