EXCLUSIVE: The Snoop Dogg vs. Eminem Issues Have Been Going on for 20 Years

For nearly 30 years, Snoop Dogg has been arguably the most relevant rapper in music history, where he’s known by the entire world. When 2pac and Biggie were both alive, Snoop was the biggest rap star at the time. Even calling out the entire East Coast, when he got booed on stage in New York City; no other artist would stand on their words more than him.

Back in 1999, Dr. Dre and Ice Cube had plans of rebooting N.W.A. with the release of their “Chin Check” single. For whatever reason, the pair felt it would be a good idea to put together a new supergroup with MC Ren and Snoopy joining as an added member. It got as far as them having an EPs worth of content recorded, which happened in 2000 during The Up in Smoke Tour.

On the album, Eminem was also set to be a featured guest throughout the project; which he was also recording content at the time as well. However, with Dr. Dre helming the tour, his main focus was catering to the masses with Shady. Em was arguably the biggest artist in the game, after his The Marshall Mathers LP that sold 3.65 million in under a month. He beat Snoop’s previous record in hip-hop, for having the two fastest selling back-to-back albums for a new artist.

Snoop was happy for Em, as he was getting back to gaining his spot in the game. After falling out with Suge Knight over not getting his masters, Snoopy felt a certain way when 2pac received his masters and royalties. Along with getting pushed aside momentarily for Pac to have his moment, Snoop had been waiting nearly 5 years to regain his spot. A lot of that played to Dr. Dre leaving him behind at Death Row Records, where Snoop didn’t have studio guidance.

Dre and Suge had their own personal issues, but the reason he left is because Snoop stepped into the music side of things. The agreement was for Suge to handle business, while Dre handled everything music; and that was compromised. Although Suge was still making sure Dogg had everything he wanted; like every iconic artist in the game, Snoop wasn’t content with having to play the back to Makaveli (much like Lady of Rage).

Now, back to The Up in Smoke Tour, Dr. Dre had Eminem closing the show with D12, with the exception of Los Angeles. This means he made the most money and had more time on stage than anybody on tour. For those that don’t know, Ice Cube pulled out of the tour on the 2nd half of its stretch of cities. So, with Cube gone, that ended plans of the NWA situation, including a major bag everyone was set to get. Luckily, that happened, because we wouldn’t Eazy E’s brand to be affected by the Y2K version of Niggas wit Attitudes.

The reason we believe it unfortunately may be Dr. Dre’s fault, is because he didn’t control egos on tour; including being there for Snoop who he brought into the game. You couldn’t tell Eminem anything, who was on top of everything and was respectfully standing his ground to make sure his boys from Detroit made it as well (Proof, Royce da 5’9″, Obie Trice and D-12). For that alone, we’ll always respect Eminem no matter what people say about him.

In his first ever GRAMMYs acceptance speech, he paid homage to a number of rappers that influenced him throughout his career. In our opinion, that allowed him a seat at the table for bringing light to those artists that never get proper respect for the biggest genre of music. Snoop kept it all the way one thousand on his interview talking about Em and had some valid points.

We have to disagree with him saying white rappers having zero respect, because Russell Simmons introduced the world to the Beastie Boys. The rap community looked at the Beasties as one of heir own and had zero problems with them in the culture.

Snoop just got tired with of the media treating Em as the greatest rapper of all-time. Many have also felt a certain way, when Eminem was the only artist in the history of rap to have creative freedom with vocals for 2pac and Biggie. This hasn’t been done on a large scale since the 2003 Resurrection project.

No one’s totally in the wrong, but this is completely ego and money. 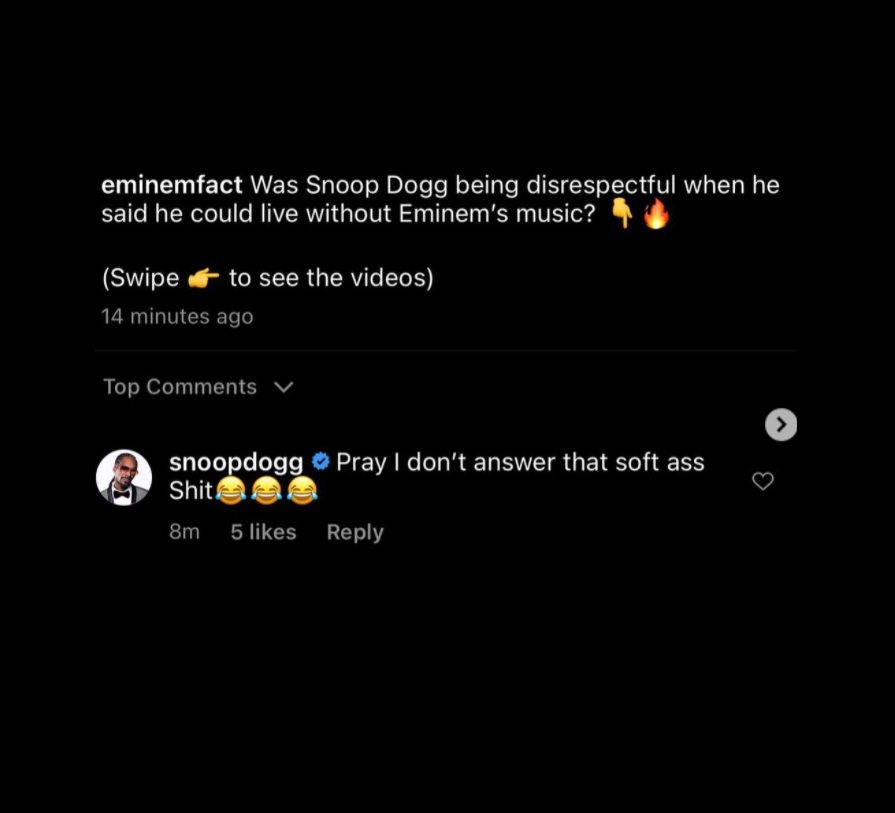