With the series up 3-1 and the Portland Trail Blazers in the driver’s seat, it was Damian Lillard time. Especially at home, trying to close out the series.

And that he did.

Though they had some stumbles throughout the game and Enes Kanter injured his shoulder, plus how they were down in the fourth quarter, the team kept battling to make it even. Lillard put the squad on his back all the way until the final shot.

In the fourth quarter, the Oklahoma City Thunder looked like they had the game sealed, up as many as 15 points down the stretch, but the Blazers found a way to crawl back into it and tied things up with less than a minute to go. Paul George hit a clutch shot down the stretch to put OKC up. Then Lillard got the rock and went straight to the hole to tie it up.

But for the Thunder’s last possession, the ball went to Russell Westbrook and not PG13, as he drove to the hoop to answer that Dame Dolla bucket and he missed.

With the final second ticking down, George was guarding Lillard as he pulled up from 37 feet and knocked down the buzzer beater to win the playoff series in cold blooded fashion. The crowd at the Moda Center went absolutely wild.

Dame waved goodbye to the Thunder’s postseason after 50 points and walked off the court. That’s a boss move if we’ve ever seen one. 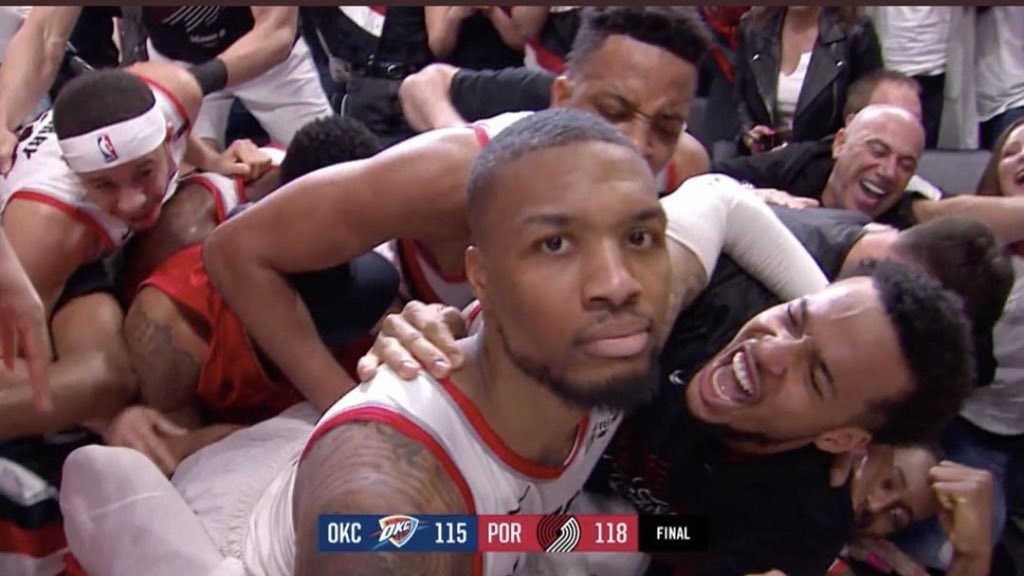 It was completely insane.

After the game George called Lillard’s heroics a “bad shot” and said the team is completely disappointed in how their season ended. There was no baby rocking or chest thumping for Westbrook either. He sounded completely shattered and said he needs to look at himself and what he can improve for next season.

In the post conference, Dame also talked about the shot and why he waved to the OKC bench afterwards, explaining that all those antics that the Thunder did throughout the playoffs were for nothing. The team kept their composure and played their game. They were just focused on winning four games and did so.

This had to be one of the craziest playoff wins in the history of the NBA.

On to the next…