It took until the third quarter for these two to go at it, but the tension had been building all game. Before things kicked off at the Wells Fargo Center in Philadelphia, Karl-Anthony Towns had words about Joel Embiid, saying he isn’t worried about him and he’s in the business of getting wins.

You knew The Process took that to heart and was jabbing at him on the court all game, until KAT couldn’t get enough and things led to blows.

Both players were ejected following the brawl, which also had Ben Simmons on top of Towns to stop the squabble on the court. The 76ers fans in attendance booed KAT when he was walking off and you can bet this isn’t the last of it.

Expect both to trade shots in the media and on the social networks for weeks to come. 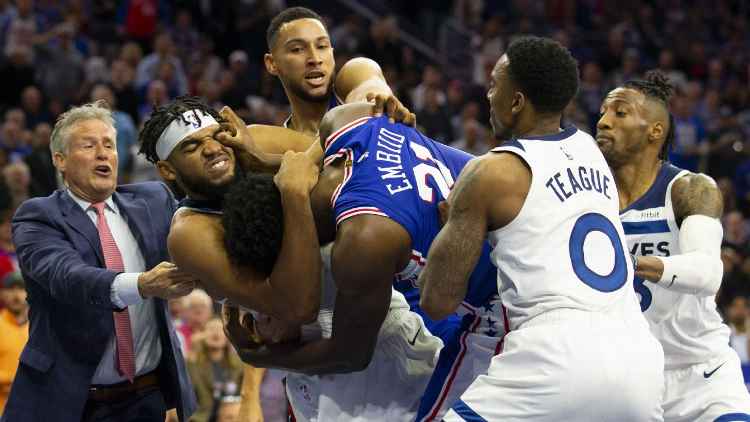 Though the two teams came in 3-0 to start the game, it was a lopsided victory for the Sixers, who cruised past the Timberwolves after KAT got ejected. At the time of their fight, Philly was up 20.

We’re sure that frustration boiled over into the altercation.

UPDATE: Joel Embiid and KAT respond to each other on Twitter.

Great team win!!! I was raised around lions and a cat pulled on me tonight lmao.. Got his mama giving middle fingers left and right. That’s some SERIOUS REAL ESTATE #FightNight #IAintNoBitch pic.twitter.com/MWc9p0jy7u

I aIN’t nO BiTcH

UPDATE: The NBA has suspended both Towns and Embiid two games for their roles in the fight. Simmons did not get fined for his role in the scuffle and was seen as a peacemaker.