“I always believed that I’d return to Cleveland, finish my career there.” (c) LeBron James

The King has finally redeemed himself in the public and peers around the basketball world, with formally announcing his return to the Cleveland Cavaliers. Except this time, there was no “Decision 2” press conference, just a heartfelt letter.

During 2010, LeBron made the toughest DECISION of his life leaving for South Beach and to join the Miami Heat, wining back-to-back championships. With Dwyane Wade’s body deteriorating in recent years, LeBron had to do what was best for his future at the prime of his career. Now he joins and young tandem of Kyrie Irving and Andrew Wiggins with the Cavaliers, even though he knows it will be tough to win in his hometown at first.

But he is promising at least one ring in Cleveland.

UPDATE: LeBron James officially signs with the Cavaliers for 2 years, $42.1 million. He has a player option to become a free-agent in 2015, but he’s hoping with the new 2016 TV deal, he sign a max contract with the team in 2016. 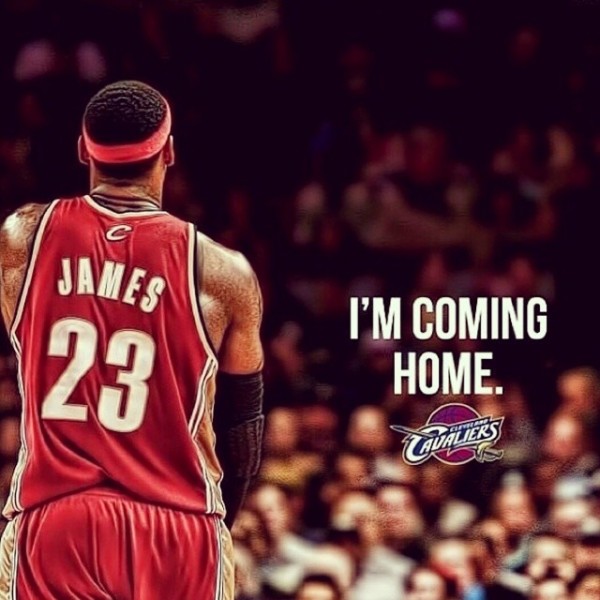 “In Northeast Ohio, nothing is given. Everything is earned. You work for what you have. I’m ready to accept the challenge. I’m coming home.”

“I always believed that I’d return to Cleveland and finish my career there. I just didn’t know when. After the season, free agency wasn’t even a thought. But I have two boys and my wife, Savannah, is pregnant with a girl. I started thinking about what it would be like to raise my family in my hometown. I looked at other teams, but I wasn’t going to leave Miami for anywhere except Cleveland. The more time passed, the more it felt right. This is what makes me happy.

But this is not about the roster or the organization. I feel my calling here goes above basketball. I have a responsibility to lead, in more ways than one, and I take that very seriously. My presence can make a difference in Miami, but I think it can mean more where I’m from. I want kids in Northeast Ohio, like the hundreds of Akron third-graders I sponsor through my foundation, to realize that there’s no better place to grow up. Maybe some of them will come home after college and start a family or open a business. That would make me smile. Our community, which has struggled so much, needs all the talent it can get.”

LBJ went on to say this had nothing to do with free agency or Pat Riley, it was more-so a decision he made with his family. He compares his departure to Miami like “almost like college for other kids,” a place where he grew up and became a better person. He pays salute to the work the Big 3 did in Miami, but he wants to restore the feeling back to Cleveland.

Interestingly enough, he also mentioned how he spoke to Dan Gilbert and the two buried the hatchet. As most know, the infamous letter Gilbert wrote when James left for Miami has since been taken down. The two spoke and put the past behind them.