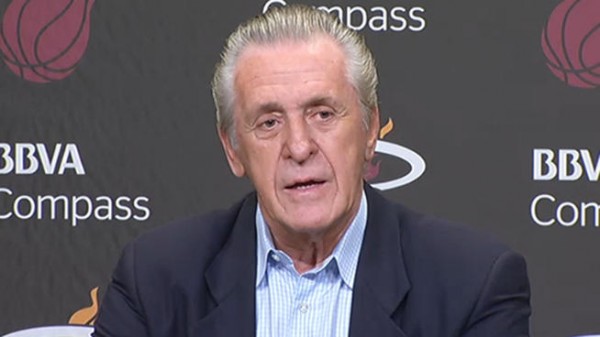 Losing happens and Pat Riley made it a point to give examples of how it’s happened in the past with great teams.

Today, Miami Heat President Pat Riley addressed the media in the final press conference of the 2013-2014 NBA Season. Riley has never been one to bite his tongue and left no doubt as to how he felt about the outcome of this past season.

“I’m pissed. I think everyone needs to get a grip. This stuff is hard and you gotta stay together if you got the guts and you don’t find the first door and run out of it, if you have an opportunity.”

The latter part of his statement is clearly aimed at Chris Bosh, Dwyane Wade, and Lebron James, who all have an early termination clause in their contracts and can become free agents. Riley knew that was what most of the reporters wanted to know about and he wasted no time in addressing the matter head on.

RELATED: Carmelo Anthony to the Heat, Is It Possible?

It appears he and Heat owner Mickey Arison are on the same page and are “willing to do whatever it takes to keep the big three in tact.” We all know Lebron James has more options than the other two and the Heat president acknowledged that fact, noting that James needed some time to think about his future, but quickly added that he loves Lebron and would love to keep him around for another 8 to 10 years.

When asked about the aging Wade, he defended him strongly calling Dwyane “Miami Heat for life”, an “icon”, and “one of the greatest players in the world”. Wade wants to play in Miami for the duration of his career and it appears he will be allowed to.

The message was clear throughout the press conference, the Heat have the flexibility in roster and cap space to “retool” and Riley is dedicated to doing just that. Even if it doesn’t include Carmelo Anthony, whose name surfaced recently as a potential addition, Pat Riley and the Heat have a lot of work to do this summer if they want to make a return trip to the NBA finals.

You can watch video of Riley’s press conference HERE.