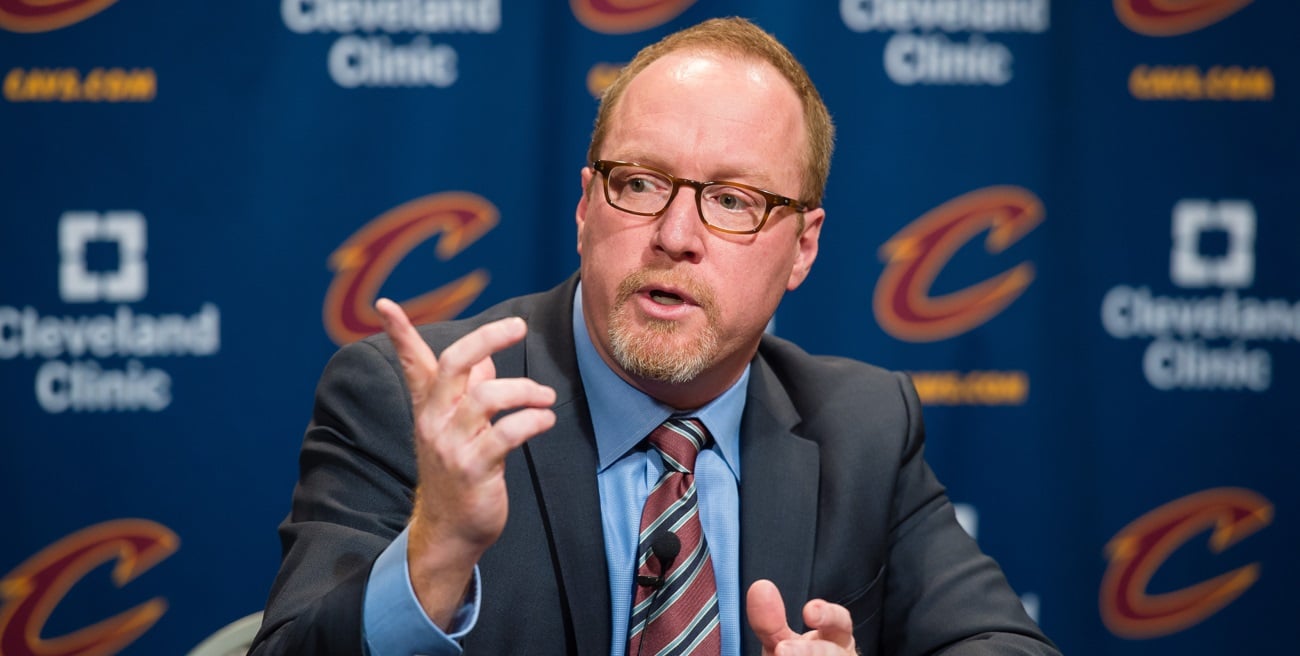 This man will get a better job elsewhere. . .

Four weeks ago, Dan Gilbert changed the immediate future of the Cleveland Cavaliers, when he fired David Griffin as team GM. According to numerous outlets, Dan wanted to trade away Kyrie Irving for Paul George – then Jimmy Butler for Kevin Love immediately after.

However, then GM, Griffin wasn’t a fan of the idea and was soon terminated. This didn’t sit well with Lebron James, who’s been rumored to having frustrations behind the scenes Gilbert, as the two could have second and final divorce after the 2018 season. The King soon wished the man that helped bring Cleveland their professional championship in over a half-century a farewell.

If no one appreciated you Griff I did, and hopefully all the people of Cleveland! Thanks for what u did for the team for 3 yrs! We got us 1🏆

Immediately after his departure from the Cavs, Dave’s name was linked to the New York, who were just removed from sending Phil Jackson on a permanent vacation from the big apple. Talks were serious this weekend, including team owner James Dolan willing to pay him a Jackson-like salary.

Unfortunately, those talks broke off, as Griffin pulled his name out of the Knicks GM search Sunday evening. Apparently, Dave wanted to bring in his own staff and get rid of everyone behind-the-scenes that had anything to do basketball-related with the team.

This means, that assistant GM, Allan Houston would be one of the first people gone from the team. So, unlike Phil Jackson and the powers that be, Griff wanted to actually make the team a winner for the first time in nearly 20 years. He also wanted complete solo authority on every basketball decision, which he didn’t him in the winning situation with The Land.

The Knicks have to hire an experienced basketball executive and give him total autonomy. It's unreal that they don't get that.

We’re assuming Dolan wanted to make it rain on another sexy name within the league, but Dave wasn’t trying to show up for only a check. After the firing of the Zen Master, Steve Mills, who’s (see: Beanie Sigel) not really qualified for the position, was appointed team GM and Executive Vice President. He soon met with Griff about his role within the organization and the two really butted heads – to the point of Dave stopping to cancel any plans he had in store with New York.

This move from NY basically exposes why they can’t produce a contender, being too many egos in the way of achieving one common goal (take a wild guess). Initially, he embraced the challenge from the job, because it’s currently the hardest to pull off in the NBA; with the exception of the neighboring franchise across the Brooklyn bridge.

I'm just waiting for the story to drop that connects the dots between Trump, Putin and the Knicks. Gotta be some smoke there.

We understand loyalty, but the team hasn’t had a playoff series victory since 2000; and an overhaul of the front office and behind-the-scenes was just too much for Dolan to do. This is still bizarre to us, in a sense, that Phil was given his demands to have complete control.

Mills was one of those people brought in by the Zen-Master, who shockingly still has a position on the team. Just days after initial Griffin talks began, Steve signed Tim Hardaway Jr. to an outrageous four-year $71 million-dollar deal (Mills won’t be present during introduction).

Doing this without making a decision on the Carmelo Anthony saga, was also a determining factor why they will still suffer another losing season in 2018. So, Knicks fans, people within the team only care about getting a check than – winning games. We feel your pain, seriously.

The Knicks are SO close to getting over this hump of awkwardness. I felt like Griffin would've pushed them over the edge of it.