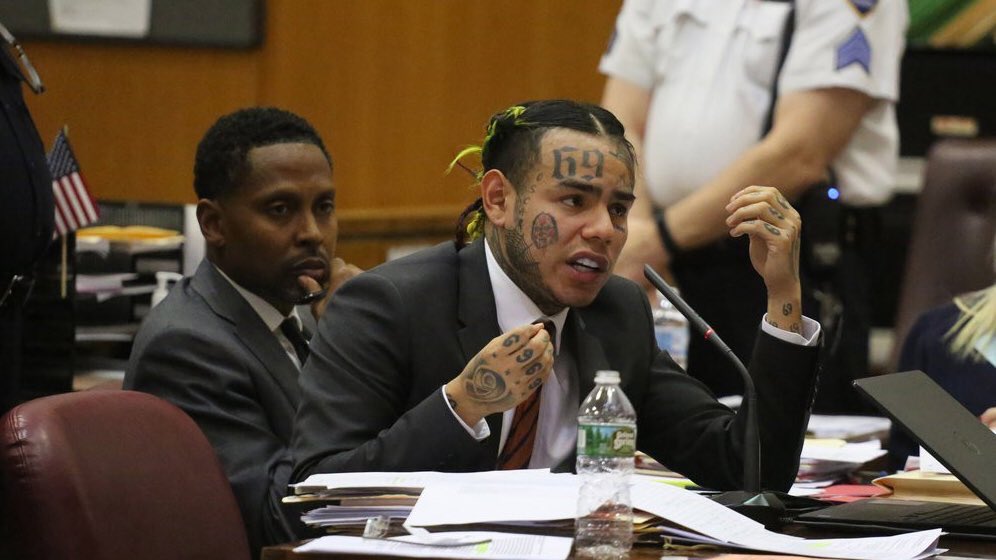 It’s the third day of cross-examination for 6ix9ine during court today and he still has a lot to say about his charges, who was part of the Nine Trey Bloods and the incidents that happen throughout his tenure in the music business.

As he took the stand in a Manhattan federal court against former associates Anthony “Harv” Ellison and Aljermiah “Nuke” Mack, Tekashi said that Cardi B and Jim Jones were blood members. He denied copying her blueprint for fame, or the fact that he puts gang members in his videos like she did.

6ix faces a mandatory prison sentence of 47 years, but could walk for his cooperation with the government during this racketeering trial.

He was questioned why was so cooperative during his cross-examination and he mentioned that it was to get a lenient sentence as well as to help the feds.

Prosecutors play phone call between Nine Trey godfather Mel Murda and rapper Jim Jones. Tekashi says Jones is in Nine Trey.
Jones: "He not a gang member no more. He was never a gang member. They going to have to violate shorty because shorty is on some bull–it."

Video of #tekashi69 on the stand in court emerges.

UPDATE: According to Billboard, Cardi B denies any gang affiliation to the Nine Trey Bloods. In the past (she told GQ in an interview last year), Bardi has revealed that she became a member of the bloods as a teenager, so take that as you may.

#CardiB denies ever being part of Nine Trey Blood Gang

UPDATE: The full transcript of the court hearing clears up what 6ix9ine said. It claims Tekashi said Cardi B was a blood, but not specifically Nine Trey.