The Cannabis Republic of Uruguay [Documentary] 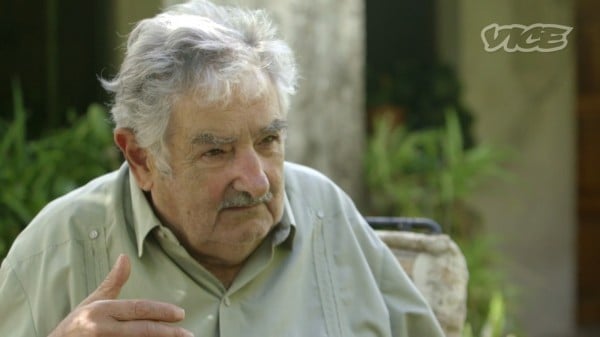 Smoking weed in front of the President of Uruguay and getting Cuban Cigars gifts? Krishna Andavolu won.

Even ahead of Colorado, the small South American country of Uruguay has changed the game globally. They have made marijuana a legal trade thanks to new legislation passed last year. You have to be registered with them and can only grow up to six plants at a time, but from the looks of it, the government will provide better weed than they can score on the black market. That “Brick Weed” looked atrocious.

VICE traveled to Uruguay to get the 411 from locals first-hand, trying to understand how the country really feels about the revolutionary laws. The older people seem to be weary about the government’s control of the drug, and the couple they talked to are choosing not to register because they want the freedom to grow as much as they want.

The young people are ecstatic about the new government.

The most interesting part of the clip is their talk with Uruguay’s president, José Mujica. At 80 years old, his ideology seems very progressive and from an intelligent viewpoint, really putting thought into each action.

For example, he realizes drug trafficking has been here since forever and the problem won’t go away, but his goal is to put a dent in it by regulating what the consumer buys, so they don’t turn to drug dealers for inferior product. Not only that, but the reason he wants people to register is because if they happen to grow dependant, they can provide help. Obviously, he doesn’t care if someone smokes casually, but if they become addicts, they should seek the help they so desperately need.

It was really surprising to hear how many gems he dropped during their sit down.